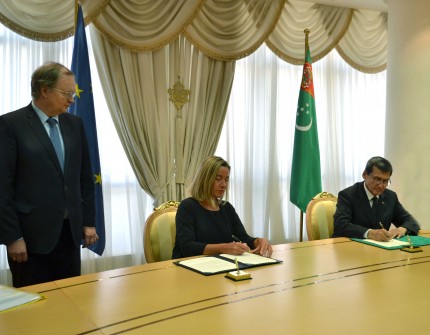 On the 6th of July 2019, a meeting was held in Ashgabat between the High Representative of the European Union for Foreign Affairs and Security Policy / Vice-President of the Commission Ms. Federica Mogherini and the Minister of Foreign Affairs of Turkmenistan Rashid Meredov.

During the meeting, the parties discussed the intensification of the multilateral cooperation between the European Union and Turkmenistan.  The achievements gained in the bilateral political dialogue, economic and regional integration, as well as the effective promotion of cultural and humanitarian ties had been noted.

The parties discussed the key vectors of new EU Strategy for Central Asia where the vital role of regional cooperation, social and economic development, energy security, creation of pleasant investment climate and joint resolution of ecological problems is stated.  The parties also discussed important projects in the field of developing transport systems and regional energy infrastructure, including the construction of the gas pipeline Turkmenistan-Afghanistan-Pakistan-India and stressed their commitment to the implementation of joint strategic goals.